These past few months I was a teaching assistant for a class on parallel computer architecture. One of the questions on our first homework assignment asked the students to analyze a function and realize that it could not be optimized any further because it was already at maximum memory bandwidth. But a student pointed out, rightly, that it was only at half the maximum bandwidth. In an attempt to understand what was going on, I embarked on a quest to write a program that achieved the theoretical maximum memory bandwidth.

What is memory bandwidth?

When analyzing computer programs for performance, it is important to be aware of the hardware they will be running on. There are two important numbers to pay attention to with memory systems (i.e. RAM): memory latency, or the amount of time to satisfy an individual memory request, and memory bandwidth, or the amount of data that can be accessed in a given amount of time1.

It is easy to compute the theoretically maximum memory bandwidth. My laptop has 2 sticks of DDR3 SDRAM running at 1600 MHz, each connected to a 64 bit bus, for a maximum theoretical bandwidth of 25.6 GB/s2. This means that no matter how cleverly I write my program, the maximum amount of memory I can touch in 1 second is 25.6 GB. Unfortunately, this theoretical limit is somewhat challenging to reach with real code.

To measure the memory bandwidth for a function, I wrote a simple benchmark. For each function, I access a large3 array of memory and compute the bandwidth by dividing by the run time4. For example, if a function takes 120 milliseconds to access 1 GB of memory, I calculate the bandwidth to be 8.33 GB/s. To try to reduce the variance and timing overhead, I repeatedly accessed our array and took the smallest time over several iterations5. If you're curious, all my test code is available on github.

I first wrote a simple C program to just write to every value in the array.

This generated the assembly I was expecting:

But not the bandwidth I was expecting (remember, my goal is 23.8 GiB/s):

The first thing I tried is to use Single Instruction Multiple Data (SIMD) instructions to touch more memory at once. Basically, a modern processor is very complicated and has multiple Arithmetic Logic Units (ALUs). This gives it the ability to support instructions that perform an operation on multiple pieces of data simultaneously. I will use this to perform operation on more data simultaneously to get higher bandwidth. Since my processor support AVX instructions, I can perform operations on 256 bits (32 bytes) every instruction:

But when I use use this, I didn't get any better bandwidth than before!

Why was I consistently getting slightly under half the theoretical memory bandwidth?

The answer is a bit complicated because the cache in a modern processor is complicated6. The main problem is that memory traffic on the bus is done in units of cache lines, which tend to be larger than 32 bytes. In order to write only 32 bytes, the cache must first read the entire cache line from memory and then modify it. Unfortunately, this means that my program, which only writes values, will actually cause double the memory traffic I expect because it will cause reads of cache line! As you can see from the picture below, the bus traffic (the blue lines out of the processor) per cache line is a read and a write to memory: 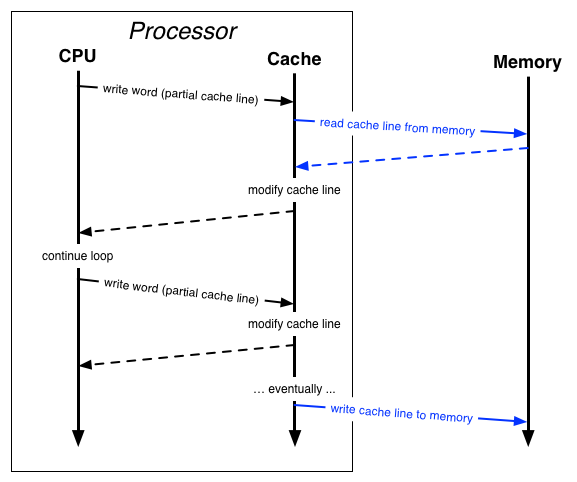 So how do I solve this problem? The answer lies in a little known feature: non-temporal instructions. As described in Ulrich Drepper's 100 page What every programmer should know about memory,

These non-temporal write operations do not read a cache line and then modify it; instead, the new content is directly written to memory. This might sound expensive but it does not have to be. The processor will try to use write-combining (see section 3.3.3) to ﬁll entire cache lines. If this succeeds no memory read operation is needed at all.

Aha! I can use these to avoid the reads and get our full bandwidth!

I run our new program and am disappointed again:

At this point I'm getting really frustrated. Am I on the right track? I quickly compare our benchmarks to memset:

and see that while I am far from the theoretical bandwidth, I'm at least on the same scale as memset. So now the question is: is it even possible to get the full bandwidth?

At this point, I got some advice: Dillon Sharlet had a key suggestion here to use the repeated string instructions. The rep instruction prefix repeats a special string instruction. For example, rep stosq will repeatedly store a word into an array - exactly what I want. For relatively recent processors7, this works well. After looking up the hideous syntax for inline assembly8, I get our function:

And when I run, I get results that are really close to the peak bandwidth:

Now the plot thickens. It turns out that it is indeed possible to get the full memory bandwidth, but I can't get close with my non-temporal AVX instructions. So what is up?

Again, Dillon Sharlet provided an important insight: the goal of saturating the entire bandwidth with a single core was perhaps a bit extreme. In order to use the full bandwidth, I would need to use multiple cores. I used OpenMP to run the function over multiple cores. To avoid counting the OpenMP overhead, I computed the timings only after all threads are ready and after all threads are done. To do this, I put barriers before the timing code:

Finally! We are within 10% of our theoretically maximum bandwidth. I'm tempted to try to squeeze out some more bandwidth, but I suspect there isn't much more that I can do. I think any more performance would probably require booting the machine into a special configuration (hyper threading and frequency scaling disabled, etc) which would not be representative of real programs.

I still have some unanswered questions (I will happily buy a beer for anyone who can give a compelling answer):